It’s a motel makeover that’s made for TV.

The Palm Sprints Desert Sun is reporting that “RuPaul’s Drag Race All Stars” winner Trixie Mattel has documeted her purchase and renovation of a Palm Springs motel for her new limited series “Trixie Motel.”

Mattel, the drag alter ego of Brian Michael Firkus, teamed with her partner David Silver to purchase the pink-laden Ruby Montana Coral Sands Inn, whose four-month-long rebirth as the “Trixie Motel” will play out over eight episodes of Discovery+ series premiering on June 3. 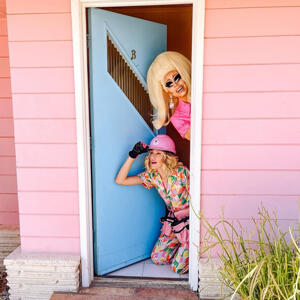 “When I first walked into the dark and dingy motel, I was disgusted, horrified and I just wanted to take a match to the place,” Mattel said in a statement. “But then I thought about how a little paint and glitter can turn a 32-year-old bald man from Wisconsin into a Hollywood darling, and I knew with our talented team and some strategic reconstructive surgery, we could turn this dump into a dazzler.”

Mattel says she purchase the motel for $2 million, then invested another $500,000 renovating the grounds and creating seven themed rooms the drag superstar says are “100 percent Trixie Mattel.”

Mattel has also starred in the World of Wonder web series “UNHhhh” since 2016, as well as the Viceland spin-off “The Trixie & Katya Show,” and the Netflix web series “I Like to Watch”, both with fellow drag queen and collaborator Katya Zamolodchikova.

Chevron integrates its US fueling applications to Apple’s CarPlay

McCormick spices up the metaverse with Decentraland experience

Female CMOs are building some of fintech’s fastest-growing brands